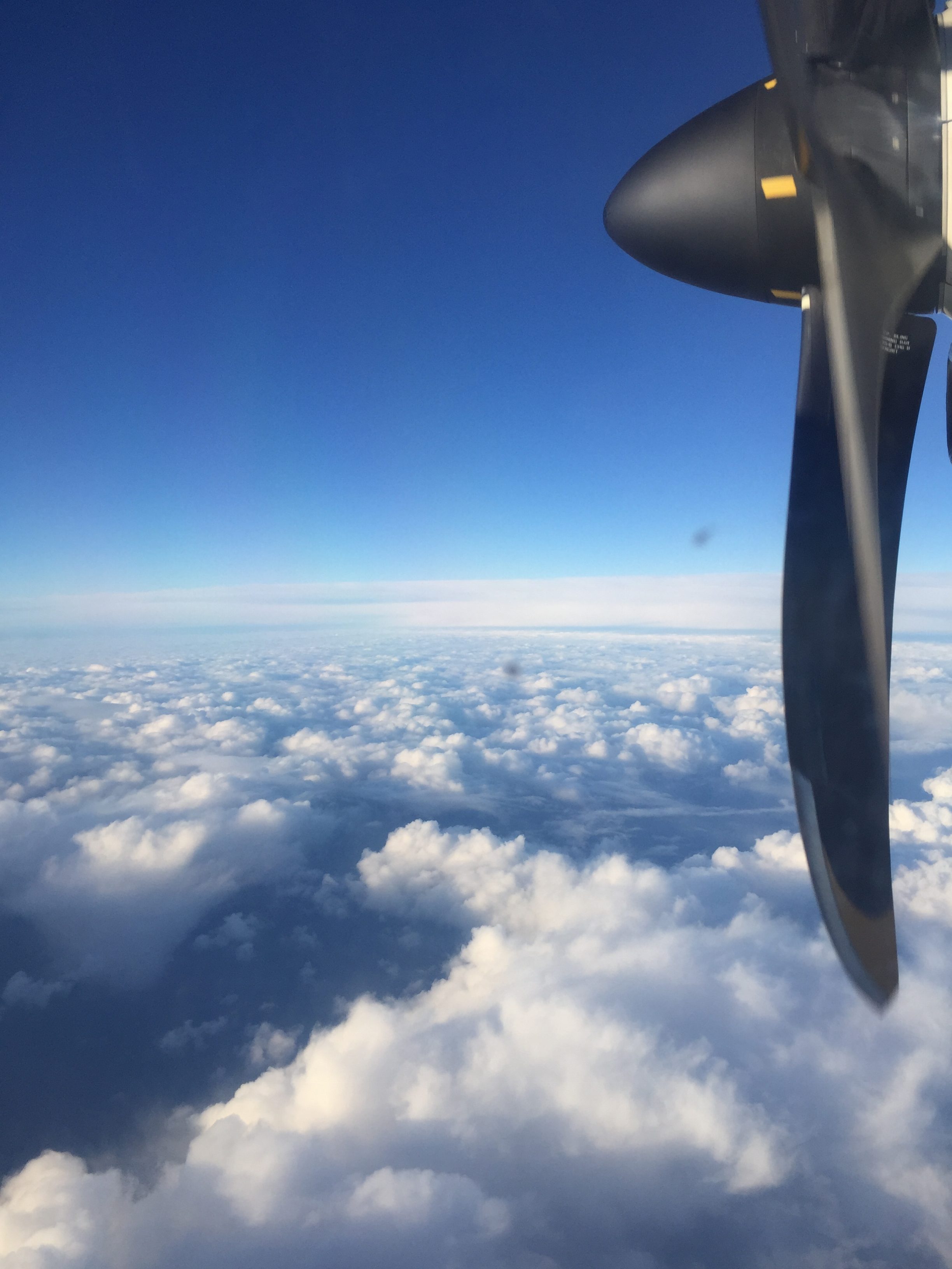 I’m just about to head out to a travel blogger Christmas party in November 2015, when I happen to see a notification on Facebook: ”Yes, I really will be attending the meet-up.” I look more closely and see that my biggest and only idol, the author of the 4 Hour Workweek, Mr. Timothy Ferriss, is organizing a get-together for 150 of his fans in Stockolm, Sweden the next day. I don’t know what to do. Should I really go to Stockholm with such a short warning just so see one guy? I’m not even sure, if I really get to meet him. It’s nothing like me to do stuff like that, because normally I plan everything well beforehand. I’m not a spontaneous person.

I purchase a ticket to the actual meet-up, but haven’t decided yet if I will go or not. When I arrive at the party, I start asking the others what I should do. It’s no wonder that everyone is urging me to go, because they are travel bloggers after all. The more I think about it, the better I realize that I’m a complete idiot, if I don’t use this opportunity. All of you have to understand the fact that meeting Tim Ferriss had been one of the biggest dreams in my life, without exaggeration.

Because of the things he has taught me during the years with his books and blog posts, I had the courage to drop out of school (one of the best decisions in my life) and go pursue my dreams. After I got home that night at 2 am, I bought the plane tickets for the next morning and also happened to get a hotel room for a good price because of a friend of mine. This helped cut down the expenses somewhat even though the trip was still pretty expensive (but soon I realized it was well worth it). Suddenly everything was ready and I would be flying to Sweden in the morning. 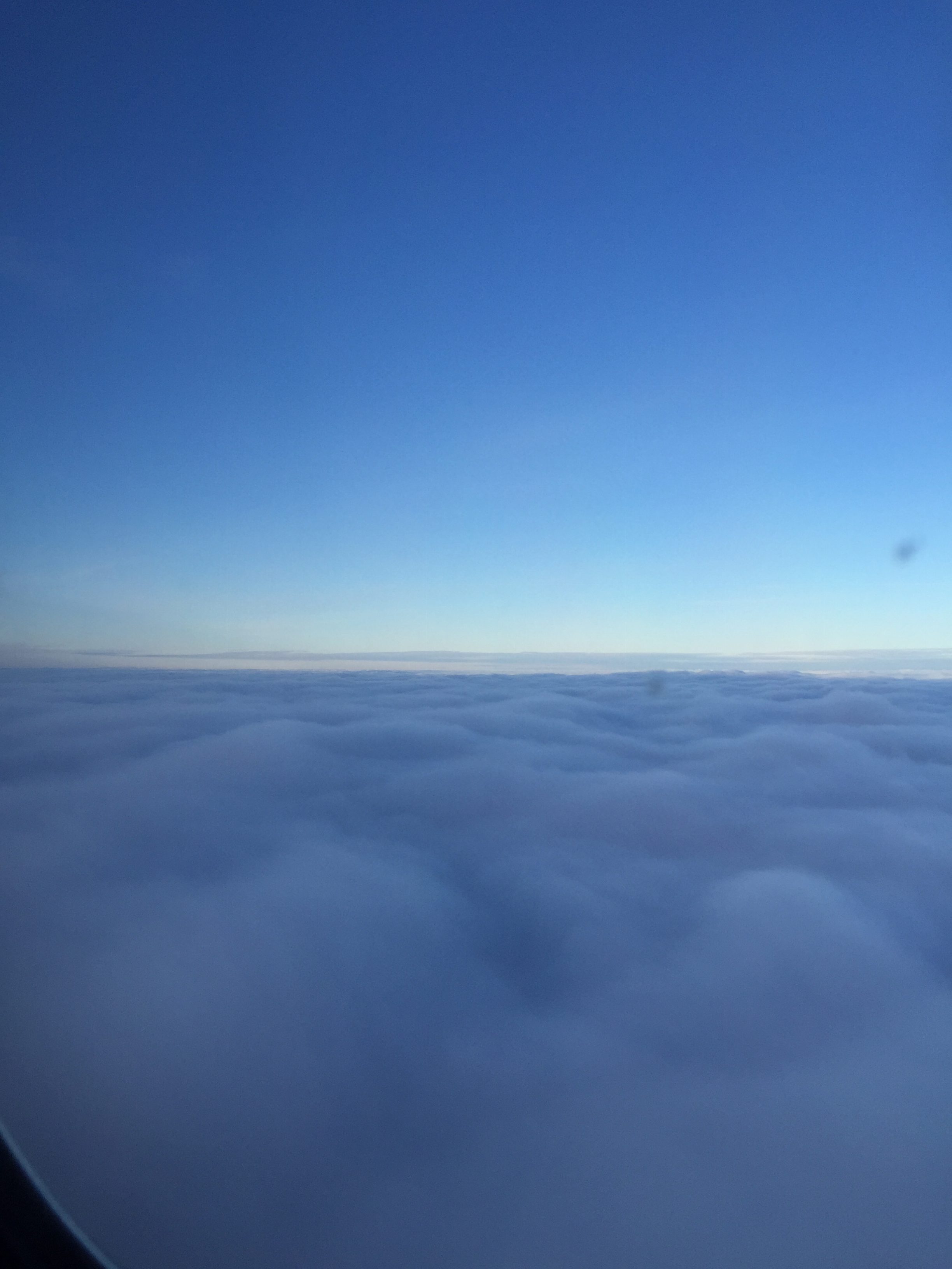 A few weeks before this moment I walked into a bookstore in Tokyo, Japan and saw an issue of ”SUCCESS”-magazine, which had Tim Ferriss on the cover. I bought the magazine, took a picture of it in our hotel’s lounge and posted it on my Instagram-account. After a while I noticed that the one and only Mr. Ferriss had actually liked the photo! That was a huge deal for me. A person, who has tons of Instagram followers and interviews all kinds of celebrities from Navy SEALs to moviestars, had just taken a second out of his day to like my picture. I kinda had made him stop for a moment.

On the last morning of our Tokyo trip we had to choose a breakfast table in our hotel’s lounge, where the TV was very visible (normally we sat in places where it wasn’t). After I had sat down I looked at the TV and saw that CNN was interviewing Tim Ferriss with a subject of ”The trip that changed my life”. The weird thing was that he was talking about his time in Tokyo!

For some it might sound silly or weird to talk about signs, energies or other mystical things, but I believe in that sort of stuff, so I couldn’t help but notice all of this. I actually sent a message to Tim through Instagram saying that I would buy him a drink one day – hoping that he would see it because he had liked the picture. At that moment I just didn’t know that ”one day” was only a few weeks away. 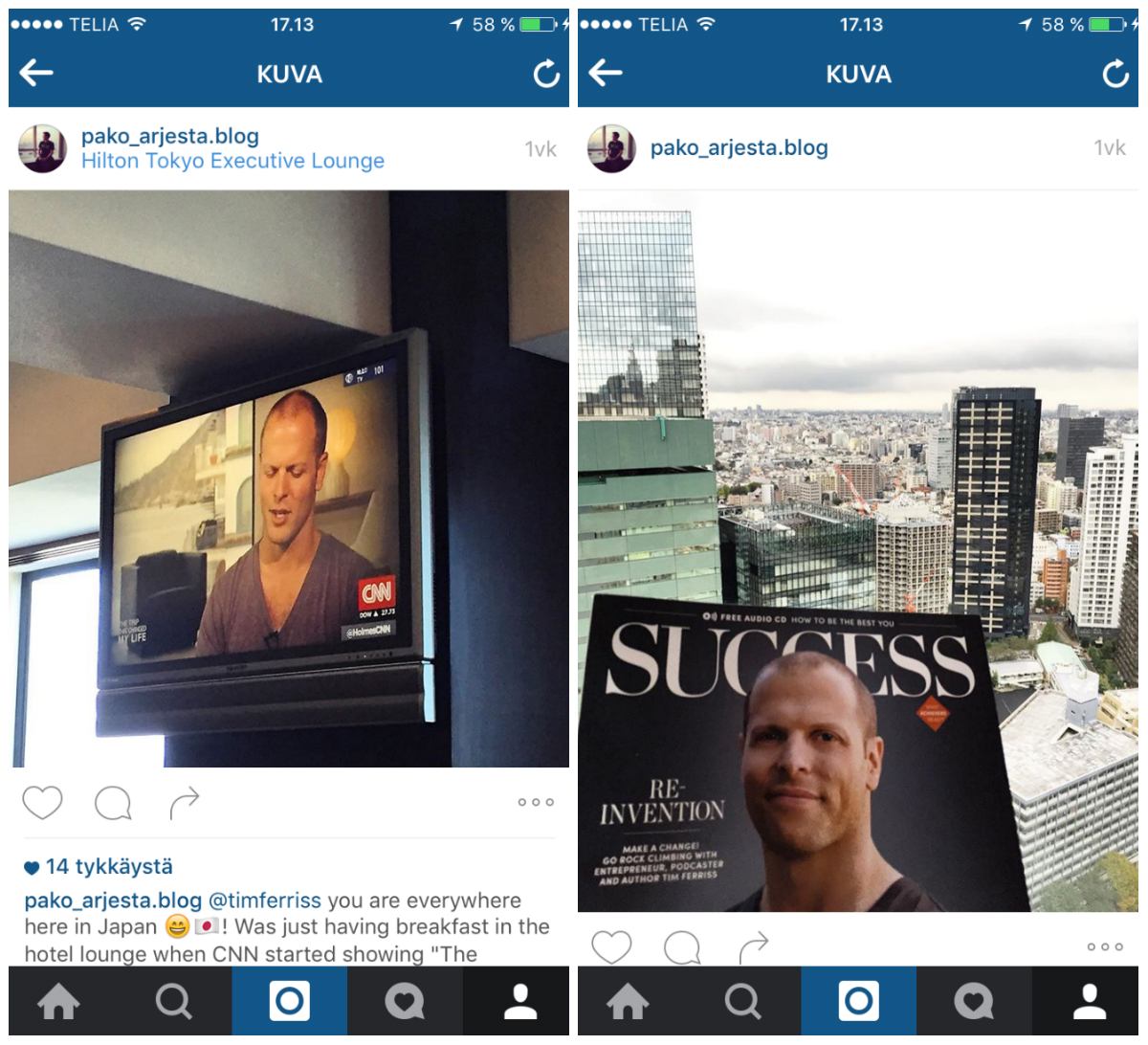 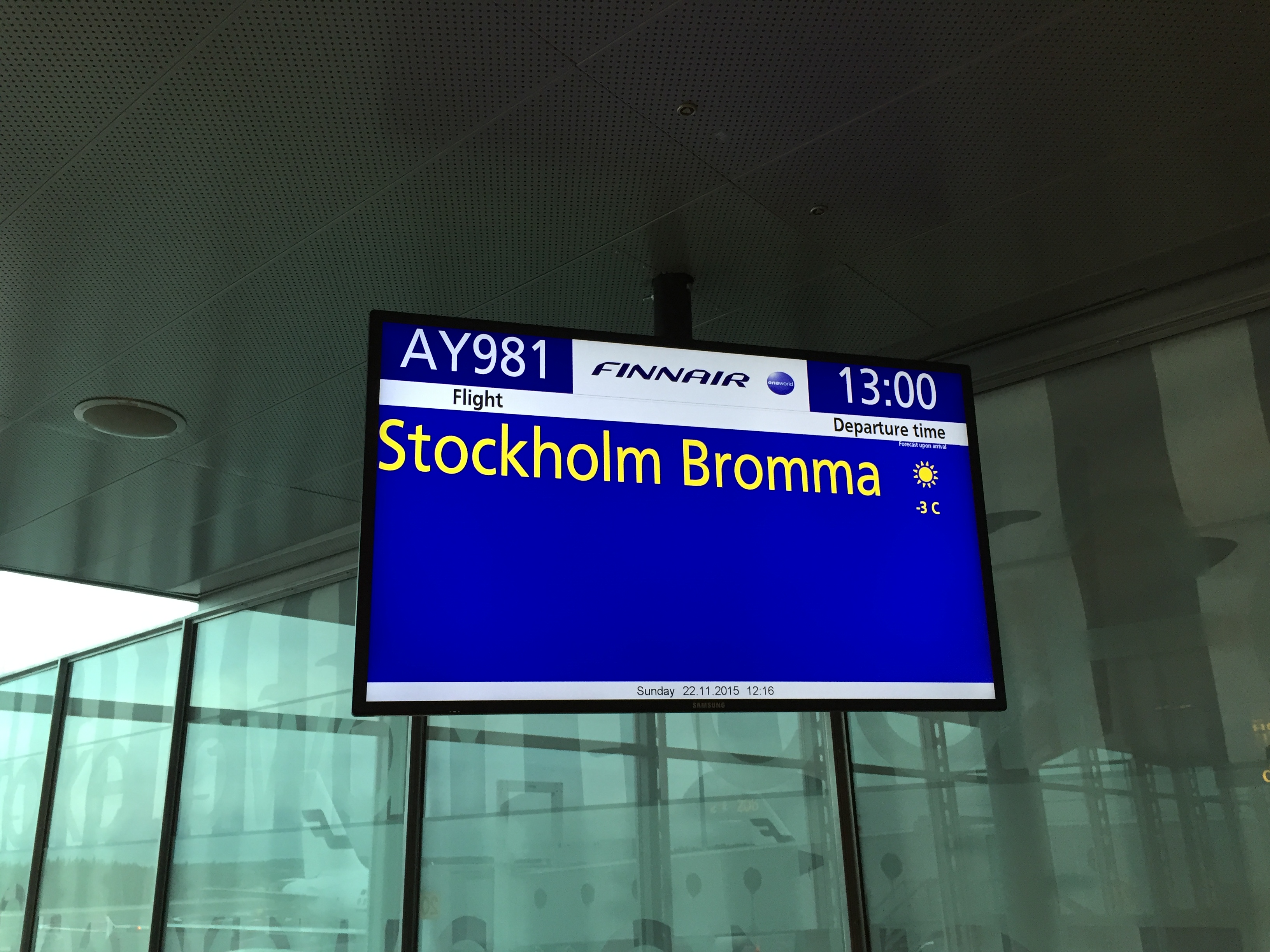 Two weeks later I was sitting on a plane bound for Stockholm to meet this person. I had dreamt about this for years. I cannot emphasize enough how important this was to me. If I could meet just one celebrity (dead or alive) in the whole world, I would have chosen to meet Ferriss. I arrived at the venue half an hour before the official time, but there were already a few dozen people there. Someone opened the locked door for me and introduced himself. I asked if Tim was already there and this guy said that Tim had been talking to people there for a while now.

This moment was just so freaking weird for me that Tim Ferriss was in the same building than me. I started walking towards the crowd and saw him. My idol was standing right in front of me talking to a bunch of people. I waited for my moment, made eyecontact and went to introduce myself. I shook his hand, quickly thanked him for literally changing my life. After that I handed him a bottle of Finnish Napue Gin I had picked up at the airport (won the title of best G&T in the world in 2015). The reason why I brought him that is because I knew he is a huge Gin-fan.

There were only two people, me included, who brought him a present, so I hope he will remember me better than most after the meeting. I was also the only one who crossed country borders to get there. I didn’t want to take too much of his time, because everyone was there to see him, so I was quick about all of this. However, I did have time to teach him how to say ”thank you” in Finnish (kiitos), because he asked me to (he is known for speaking many languages fluently).

Once the official part of the evening started, we gathered around him and started a kind of Q&A asking him questions from everything between virtual reality to liquour and artificial intelligence to investments. It was so weird listening him answer the questions so close up and not from a computer screen or a podcast like most of us were used to. Even more weird was the moment when he took eyecontact with me, when mentioning the Napue-bottle and saying ”kiitos” to me in front of the whole crowd. Maybe this is what it feels like for those screaming teenage girls, when they are watching their favourite band right next to the stage. Fortunately I’m not the screaming kind so I just tried to be laidback and an ”easy” fan for the night. 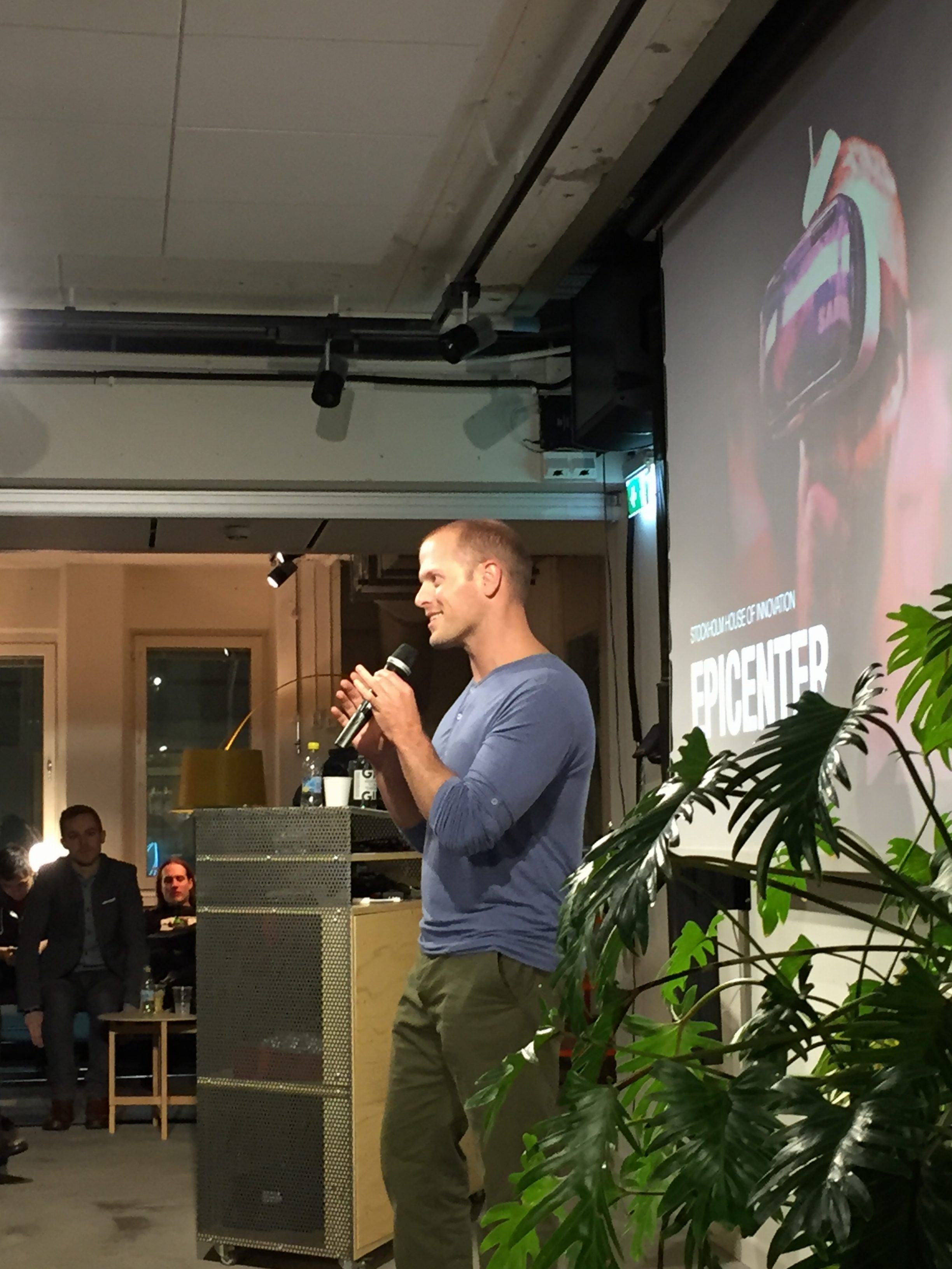 But what if your idol (idol is a HUGE thing for a person) is something entirely different from what you have expected? What if he is a complete asshole and you realize that you have wasted a huge part of your life by looking up to him? That is always a possibility and a risk you have to take when meeting one.

Fortunately I can say that I’m lucky, because it was nothing like that with Ferriss. It was actually fantastic to realize that the man standing in front of me was everything he seems to be in the public eye. Actually he was even more relaxed and nicer than I knew. There wasn’t even a hint of arrogance or other negative things that fame and fortune might bring with them.

Maybe it also has something to do with the fact that the fans of Mr. Ferriss are a bit different than the ones that bands and actors have. Ferriss-fans are entrepreneurs, dreamers and doers – people who like to take their life into their own hands and forge something better out of it.

Because there was more than enough people at the event, I didn’t have much time to talk to him. The short conversations I had with him, I actually had to just take, not ask, because in a group like that the shy and quiet ones don’t have a chance (good that I’m neither of those things). I still wanted to keep my conversations very short so that I didn’t take too much time from the others.

Either way I had gotten everything I wanted from the trip. I got to shake his hand, thank him for everything and also got a selfie with him (I almost never do selfies). On top of that I got to talk to him about Tokyo and even hug him when I left after the evening was over. I have to say the whole event was pretty fantastic. It should have lasted only for two hours originally, but it went overtime and we even went to an afterparty at a bar afterwards. When we followed Tim to the bar we looked like his diciples or something on the dark streets of Stockholm. 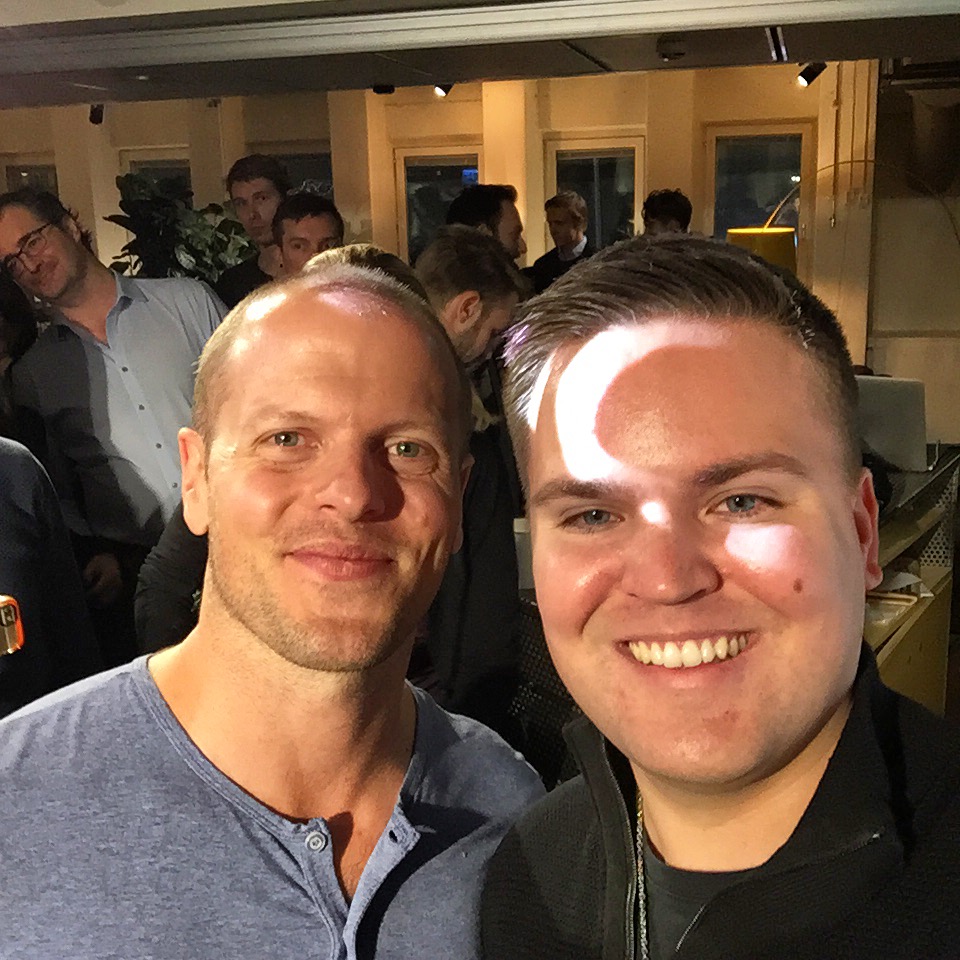 This picture isn’t the best possible, but still this means the world to me

After I got back to my hotel I still had to go for one last drink to the lobby bar to contemplate on the whole evening. Then I remembered the message I had sent on Instagram a few weeks before, that one day I would buy Ferriss a drink. I got a little annoyed at myself, because I realized I had just missed the best chance I would probably get in a while. But after a minute or two I remembered the Napue-bottle I had given him and realized that I had also fulfilled that goal without even knowing it – and actually I did it like a boss, because a bottle is always better than a glass.

I couldn’t stop myself from smiling when I was looking at the quiet streets of Stockholm thinking how great life can be. If you have the courage to set even crazy goals for yourself and also have the guts to believe in them, anything can happen in this world. I’m a living example of this.

I have no idea how many of you read this blog post all the way through, because I doubt there are that many of you who are as huge fans of Ferriss as me, but the moral of the story is this: You can have anything in this life, if you are ready for it. I didn’t know how or when I would get to meet Ferriss, but this was the moment I truly realized it’s not important to know all the details, if your goals are clear enough – just know that you will get there.

At the end of the trip when I was flying home the next day, I also realized on top of all of this what I really want to do with my life. I finally knew that I want to be a travel blogger for a living. So was the trip worth it? I think you can see clearly that it was one of the best investments money- and timewise I have ever made. 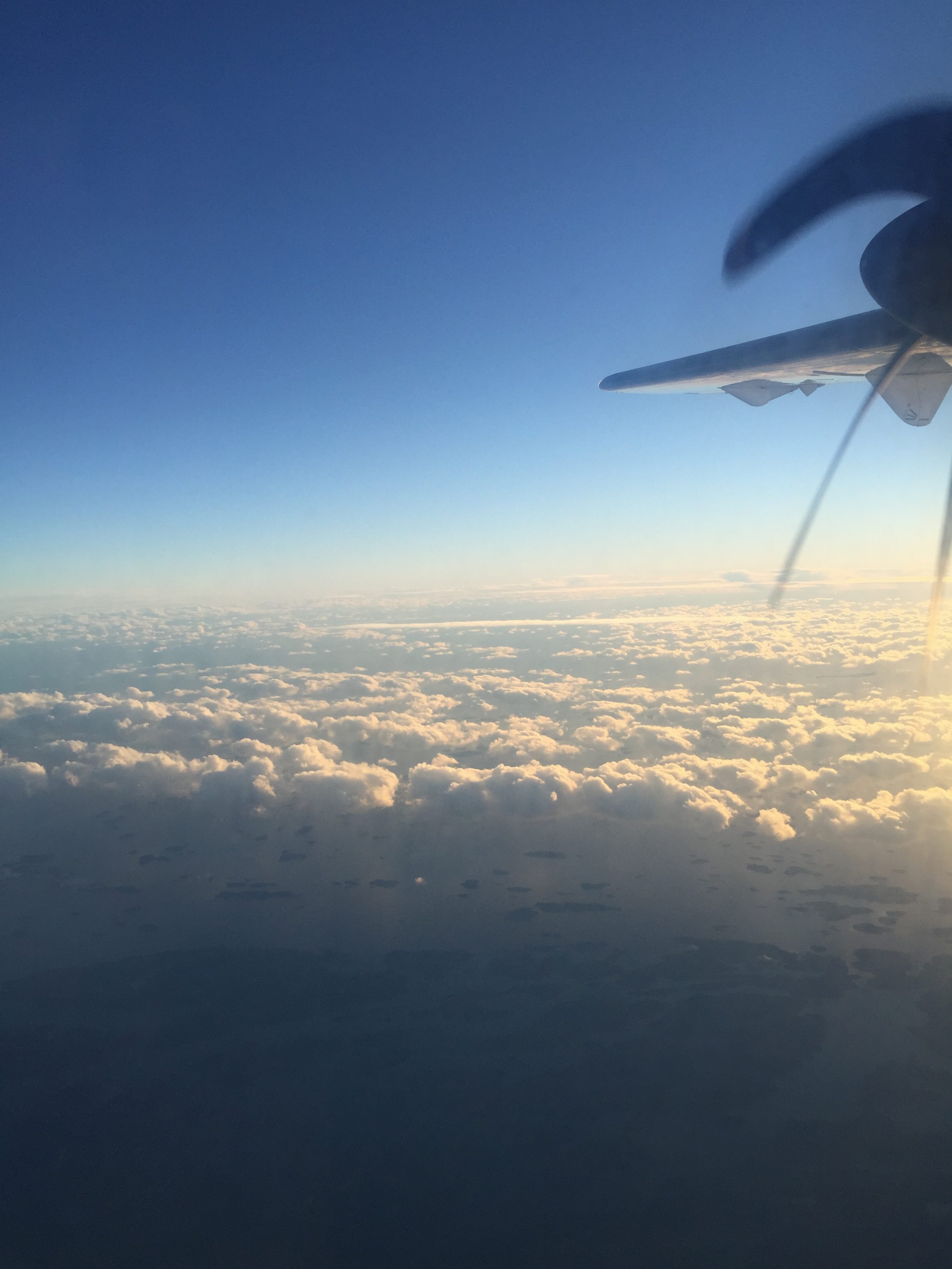 It would be very interesting to hear if you have any idols in your life? Have you perhaps met them or would you even like to meet them?

One of the best hotels in Berlin – Waldorf Astoria *****

This site uses Akismet to reduce spam. Learn how your comment data is processed. 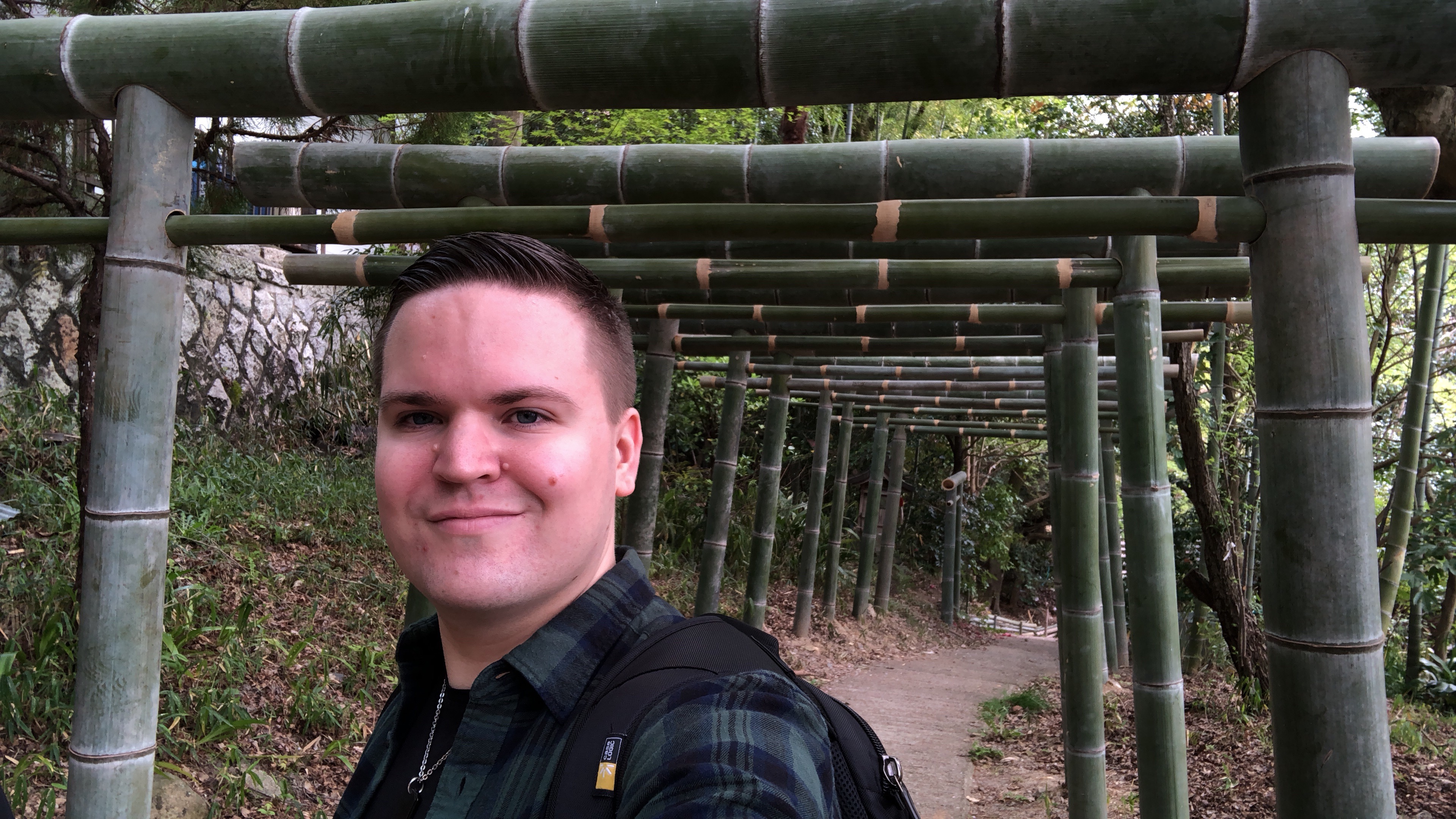 I'm a Finnish entrepreneur / luxury travel blogger and always strive to be the best version of myself by constant improvement. I feel most alive when travelling, so that is where my money goes. There's no denying it, I love luxury and can't get enough of it, which goes well hand in hand with my self-improvement philosophy. I'm extremely loyal to my readers and the companies I work with, so please do not hesitate to contact me with collaboration suggestions or reader comments at:
jerry(@)escapemundane.com